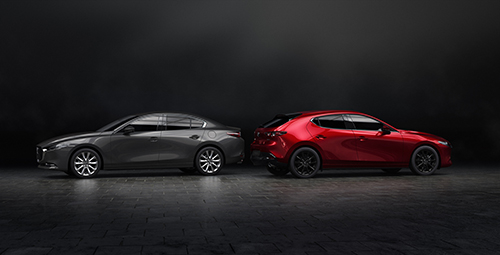 The Mazda3 adopts a matured Kodo design language that aims to embody the essence of Japanese aesthetics. While the overall form presents a simple, single motion, subtle undulations bring the design to life through shifting light and reflections that glide over the body surface. The result is a more natural and powerful expression of vitality than previous Kodo models. Despite sharing the Mazda3 moniker, the hatchback and sedan models have distinct personalities; the design of the hatchback is emotive, the sedan elegant.

The model incorporates Mazda's Skyactiv-Vehicle Architecture, designed to help people to make the most of their natural sense of balance. The powertrain lineup comprises the latest Skyactiv-X, Skyactiv-G and Skyactiv-D engines, each of which provides responsive speed control in any driving situation. Based on its philosophy of designing the car around the human being, Mazda has dramatically enhanced the model's fundamental driving attributes to make accelerating, turning and braking feel completely natural.

Mazda aims to make a special bond with customers by offering products, technologies and services that appeal to more people.